The Best Board Games For A Family Christmas

It’s Christmas Day. You’ve opened the presents and eaten the roast dinner, and there’s still about four hours until the good evening TV shows come on. The kids are milling about while the parents are nodding off in the comfiest chairs in the living room, and the celebrations seem to be grinding to a standstill. In this moment of festive limbo, there’s nothing better to keep the whole family together and entertained than a good board game.

We’ve selected some of the very best family games that will be exciting for all ages and shouldn’t lead to too many heated debates (at least, not as many as your average Christmas Monopoly session).

Competitive or cooperative, they’re guaranteed to generate the perfect amount of energy that will see you and your family over the after-lunch slump and beyond. Every game on this list has exceptional design and gameplay that dazzles with either complexity or deceptive simplicity, and often balancing both.

1: Skull – High stakes tension with the simplest of rules 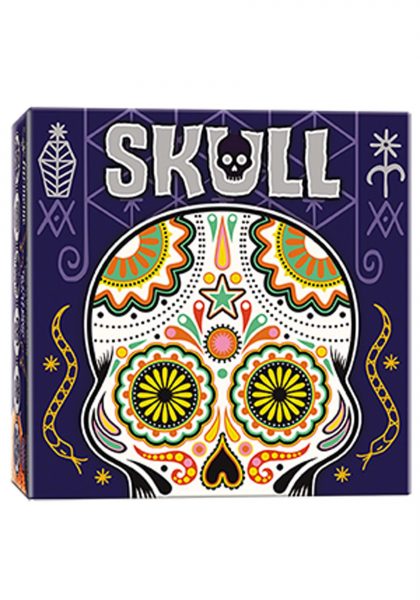 A classic ‘more than the sum of its parts’ game, Skull is a perfect choice to liven up the Christmas afternoon, no matter how much bubbly might have flowed over lunch. With just four cards in play for each player, the only other necessary components to Skull are confidence and a strong poker face.

Skull is incredibly easy to set up and doesn’t even require you to clean up too much of the day’s mess to make room for it. The rules are very simple – each player starts with one skull card and three rose cards and plays them face down until someone feels confident they can bet on how many roses in a row they can pick up without revealing a skull. They make their bid, daring the other players to outbid them. The highest bid takes on the challenge and, if they find the predicted roses, wins the round, but if they find a tactically placed skull, they lose a card.

It’s a game of bluff and calculated risk that slowly transforms into a memory challenge as players’ decks are reduced – being able to work out what’s still in play becomes the key difference between victory and defeat. This precise balance of skill and luck for all players means that every win feels like a proper triumph and your family will insist on rematches.

Oh, and did we mention that Skull is one of the most visually striking board games that you could grace your living room with?

2: Concept – Charades that you can play sitting down 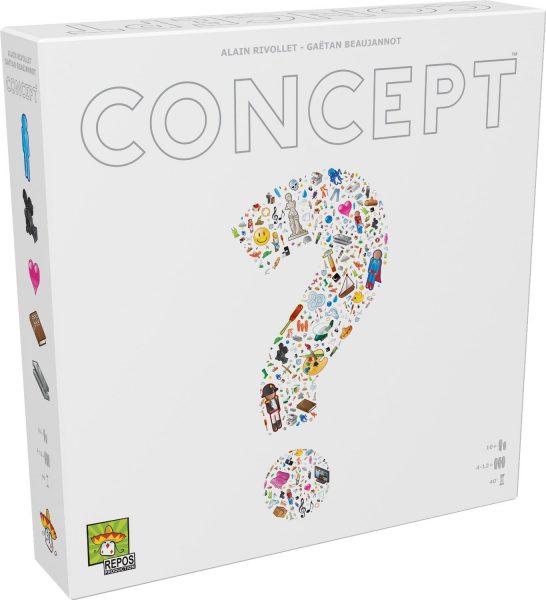 Any large, celebratory family gathering has a 50/50 chance of descending into a game of charades. With Concept, that feeling of thrillingly rushed and hilariously flustered explanation has been transformed into a board game that takes this tried and true format and makes it cooperative, adding new layers of critical thinking along the way.

Breaking into teams of two, these teams then pick cards of varying difficulty which they then have to explain to the rest of the players using only the pictures on the board. After setting out the central concept with their largest token, the explaining team must then place smaller tokens on descriptive pictures until someone works out the card, winning points for both themselves and the explainers.

Concept is a nice twist on the classic formula, and has everyone working together. By retaining the simplicity of the central, um, concept of charades means that it’s customisable to any family’s shared references.

3: Beasts of Balance – spectacle, imagination, and technology, oh my! 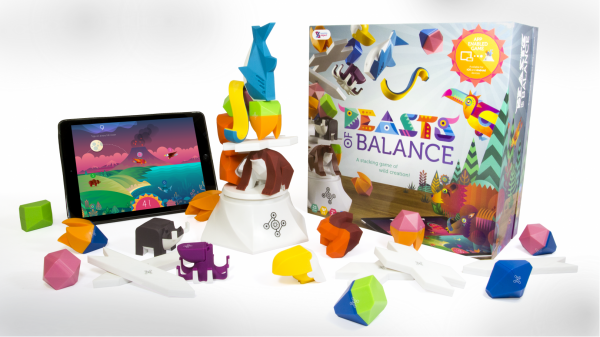 Are we a bit biased towards this one? Maaayyybeee. But for good reason. Not only is Beasts of Balance a whole ton of fun, it transforms your tablet from something you might want to discourage over Christmas into one of the best ways to enjoy time as a family, cooperatively or competitively to suit any preference. It’s got something for everyone, whether you just want to test your stacking skills and beat high scores or dig deeper into the game’s world.

Beasts of Balance presents you with a world of discovery – the lovingly crafted game pieces transform into cute and bizarre creatures in the app. Younger kids will love seeing the different hybrid creations they can make by combining the critters and the game pieces can happily double as simple toys. It’s a Christmas gift with a long lifespan and with the range of new expansions, there’s even more depth and fun to be had.

What other board game lets you build a world where you can see your moves play out in real time? What starts out as a gentle stacking game can become a manic rush for survival, the kind of high stakes excitement that will have your whole family clamouring for ‘just one more go’ over and over again.

4: Trapwords – for fiendish and fantastical competition 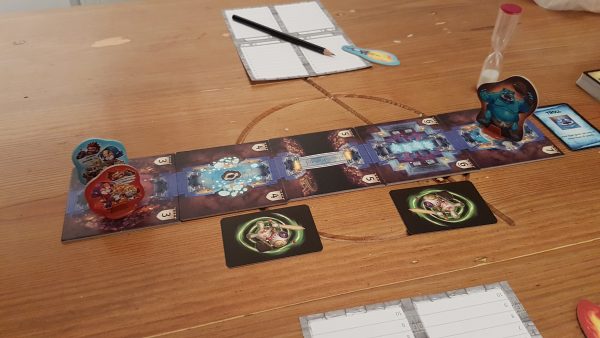 In a way, Trapwords is the polar opposite to Concept. Teams still have to guess words, but instead of any help from other players, the way in which they can explain their word is limited by the other team banning the explainers from using certain words, like the classic game Taboo. The particularly evil twist? These banned words are not given to the explaining team.

Trapwords centres around a story of teams making their way through a fantasy dungeon, and this sense of progression and adventure makes wins all the sweeter and defeat all the more bitter.

It’s an exciting way to fill a Christmas afternoon and is only made better by the presence of family. After all, who better to ban certain words from your vocabulary than the people who know you the best?

5: Dinosaur Tea Party – for the fanciest of families 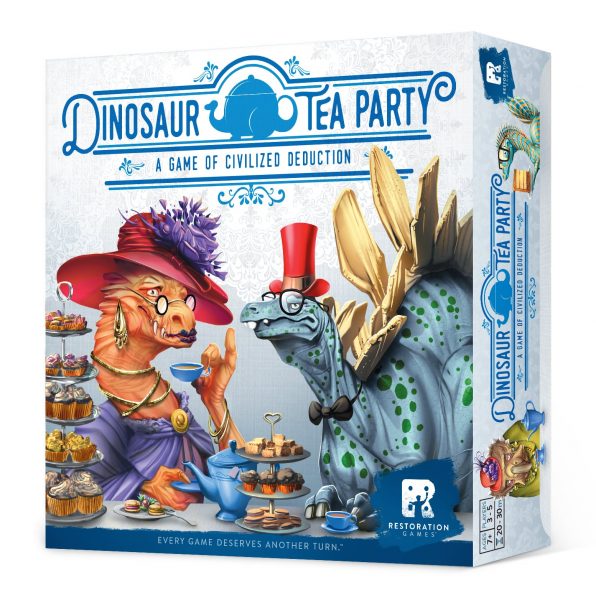 It would be easy to pitch Dinosaur Tea Party as ‘Guess Who with dinosaurs’ and just stop writing right there. Who needs more than that? Kids will be immediately entranced by the whimsical designs and there’s a charm to these giant monstrous lizards having old-timey names that will draw parents in too.

It’s a relatively simple deduction game, using clues and questions to determine all the dinos’ names to avoid committing a prehistoric faux pas at the party. For young newcomers to the genre, it’s a delightful jumping off point and there’s a clear love and passion from the team in every aspect of the design.

From winning sugar cubes as points, to afternoon tea recipes in the manual, silly fun is the name of the game and Dinosaur Tea Party certainly doesn’t skimp on that front. For any dinosaur-loving kid – which, let’s be honest, is most of them – this will guarantee laughs and smiles on Christmas morning.

6: Codenames – as tense as you can get without spoiling Christmas 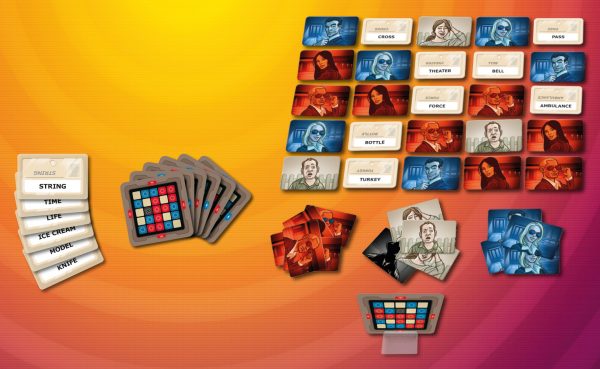 Another word-guessing game – they really are some of the most reliable family entertainment out there – Codename separates itself from the pack with its breathless tension. Its high-stakes spy theme isn’t just there for show, all the intrigue and danger of the genre ever-present.

25 cards are laid out on the table and one member of each team is assigned as a spymaster. The spymasters know where their team’s spies are located, as well as innocent bystanders and the deadly ‘assassin’ card. To put their team on the right track, the spymaster must examine the board and find a word that fits with as many of their spies’ codenames as possible.

As an example, they might say ‘Dinner 3’. This tells their team that there are three codenames related to ‘dinner’ that will earn them points, but if they flip over the wrong card they lose this chance – and if this wrong card is the assassin, it’s an instant game over.

Spymasters have to think strategically and intelligently to make sure their clues can’t be misconstrued, and their all-knowing fear makes for a constantly hilarious contrast to the blind, hopeful guessing of their teammates. For a family with older kids, Codenames is the kind of engaging and immersive fun that’ll have you demanding a round 2 the instant you finish a game.

7: Exit: The Game – capturing the zeitgeist 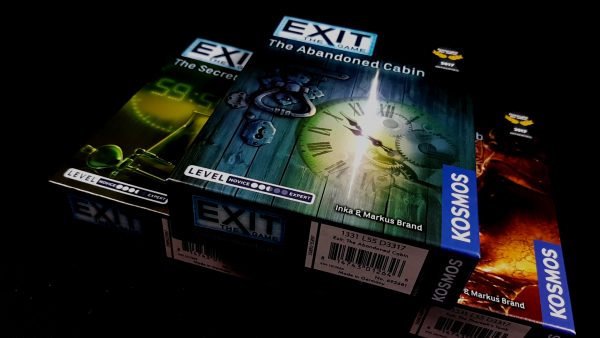 There aren’t many hotter commodities out there at the moment than escape rooms. Already rather popular beforehand, they’ve taken the world by storm in 2018, being featured in TV shows and movies, and there’s a huge range of different themes you can choose.

With Exit, you can bring this experience home, which is sure to satisfy a vast swathe of Christmas lists. There are many different Exit themes out there, from a spooky isolated cabin to an Ancient Egyptian tomb, and all of them combine the deduction and logical thinking that make any escape room such brain-teasing fun.

Though an Exit game can only be played once, it’s precisely this destructive interactivity that makes it such a brilliant Christmas Day proposition. It’s impossible for all the players to not get very involved, both mentally and physically, with the mysteries.

Exit requires team spirit and cooperation more than perhaps any other game on this list, which is why it’s such a great centrepiece Christmas activity.

This marks the end of our list! If you want to keep up with more games recommendations, news, and offers on our own game (Beasts of Balance), make sure to sign up to our mailing list below.